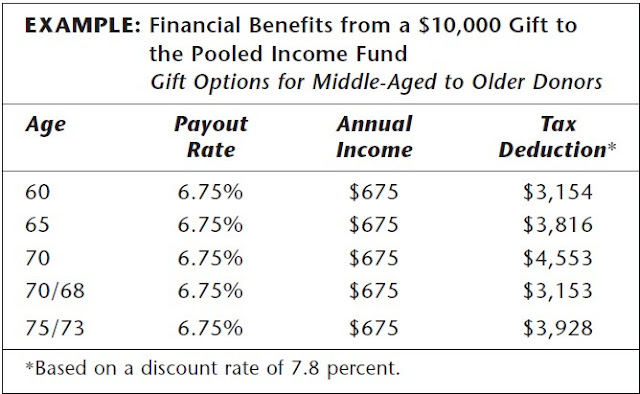 Recognized in 1969 when they were included in the Internal Revenue Code, pooled income funds are another important gift option for donors. According to wikipedia DEFINITION it is a type of charitable mutual fund created from securities or cash donated by an individual, a family or a
corporation to a charity, which is then invested to provide dividends for both the donor and charity. The donations are irrevocable and tax-deductible and must be from personal assets. If you are a donor to the fund, you and the other income recipients you choose receive quarterly payments for life, and upon your death the value of the assets will be transferred to the beneficiaries.

Pooled income funds define income as income from earnings on investments, such as interest income, CD interest, bond income, and dividends from stock, net of investment expenses and management fees. Capital gains from the sale of assets are considered principal rather than income. No capital gain or any portion of the portfolio can be distributed as income for the beneficiaries. Instead, the actual net income produced by the fund, less expenses, is distributed proportionately to the beneficiaries.

How does it work?

The concept is simple: You make a gift to a pooled income fund, which works like a mutual fund. You receive a variable income based on market performance for your life and perhaps for another beneficiary’s lifetime. Unlike the charitable gift annuity, which is age sensitive, the pooled income fund rate is market sensitive, and the rate may increase or decrease depending on the fund’s investment performance and earnings.

The income stream must run for the lives of the beneficiaries; an income stream for a specified number of years is not allowed. You obtain a charitable income tax deduction in the year the gift is made; upon the death of the last beneficiary, the charity receives the remainder interest–the amount that remains after payment of the income stream. The amount may be more or less than the original amount of the gift, depending on investment performance and market conditions. The remainder interest cannot be split among unrelated charities; it can only go to the charity that established and managed the fund.

The fund is considered “pooled” since your gift is pooled, or commingled, with other donors’ gifts; the large amount of smaller gifts in the fund produces the opportunity for a higher rate of return than a single donor could achieve independently. Most charities require a minimum gift of $5,000 to a pooled income fund; additional gifts can be made, often as low as $1,000 or more. You can make a gift of appreciated securities to a pooled income fund and avoid paying capital gains taxes on the
appreciation. You will obtain a current charitable income tax deduction for the present value of the remainder after the death of the last beneficiary. A gift to a pooled income fund offers significant tax
advantages.

Charities can offer different types of pooled income funds that produce varying returns because of the structure of the fund.

A high-income fund typically is invested in high-yield corporate bonds, mortgage-backed securities, and utility stocks. The bonds are “laddered” so that they mature at five-, ten-, fifteen-, and twenty-year intervals. Laddering stabilizes income and preserves the underlying value in the bonds. A balanced fund contains a mix of fixed income investments, such as those in the high-yield fund plus growth assets such as blue chip stocks and other dividend paying stocks.

A growth fund produces little income except for dividends from blue chip stocks and other types of investments. Agrowth pooled income fund preserves and “grows” the principal from the capital appreciation of the assets, providing maximum benefit to the charity; there is little income immediately, but as the fund grows so does the income. Upon the death of the beneficiary, the charity uses the remainder of the pooled income fund consistent with your wishes.

Benefits of pooled income funds include:

The following image example presents the financial benefits from a $10,000 gift to a pooled income fund Image example here:

A pooled income fund is unique, and not all types of assets can be used to fund a pooled income fund gift. Because each beneficiary’s income is affected by all of the other donors’ gifts, you cannot make a gift that will not immediately generate an income. Otherwise, the total amount of income in the pool would stay the same while the number of beneficiaries would increase, reducing all beneficiaries’ income streams.

Self-dealing rules may prohibit a sale to you or your family. Tax-exempt securities are not permitted as gifts to a pooled income fund. If you want to give tax-exempt securities, which typically do not appreciate significantly, you may sell the securities and then contribute the cash proceeds. While theoretically gifts of real estate can be transferred to a pooled income fund, they are inappropriate for such funds and are not permitted by most charities.

Making a Pooled Income Fund Gift  through a Community Foundation:

Many community-based foundations offer pooled income funds under the name of the foundation, enabling area charities to participate in their fund. Donors to the organization can make a gift to the community foundation and designate the remainder of the gift to support a particular charity.

What donors need to know About planned giving

Everything You Need To Know About Charitable gift annuities (pros,cons,benefits,rates,gift,tax deduction,Contract and example)

About Gifts of Life Insurance (Pros, cons and terms explained)