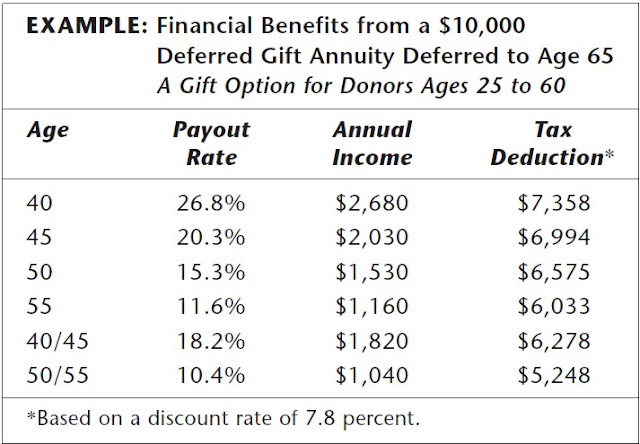 The deferred gift annuity is a very appropriate option for donors ages 25 to 60. Like charitable gift annuity, it pays an income stream, but it also begins at a point in the future. It is a very straight forward process just like this: you make a gift, charity agrees to pay you and your second beneficiary and a stream of income for life, will beginning at a point in the future. A longer delay between the creation of the deferred gift annuity and the commencement of payments result in a higher annuity rate and a larger income tax charitable deduction.

Upon your death, the charity has the use of the remainder of your gift. You need to know that your income stream must be deferred for at least one year after gift is made. Many donors choose age 65 or older to receive the income stream because they will have retired and expect to be in a lower tax bracket. Used this way, the deferred gift annuity is similar to an IRA. Unlike the charitable gift annuity, the deferred gift annuity pays the highest rate to the youngest donors since there is a longer period of time between the date of the gift and the drawing of income. The charity invests your money for years, anticipating the time when income payments must be made.

Older donors also may use a deferred gift annuity and defer income for several years. This may be especially useful for a donor who wants to defer receiving income until some time after age 70 or later.

Benefits of deferred gift annuities include:

The following example presents the financial benefits from a $10,000

5 ways to protect yourself from fake charities and donations scams.