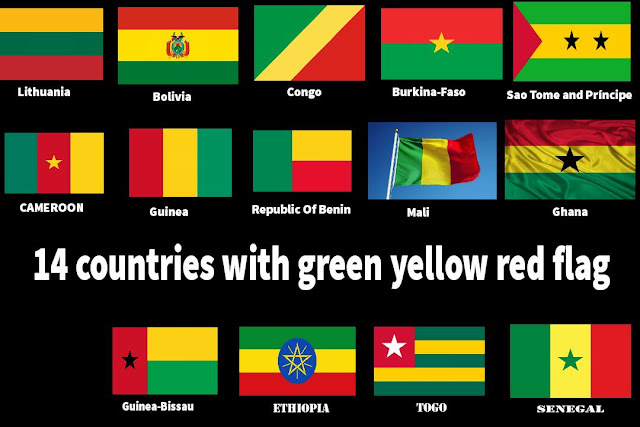 With the achievement of independence after World War II, about 12 African countries adopted the use of green yellow red colors of their flags which were later known as the Pan-African movement and PAIGC colors. Other countries that also use the same color are the Republic of Lithuania located in the Baltic region of Europe and Bolivia in central-south America, Myanmar, and Saint Kitts and Nevis.

The color green, yellow, and red in flags of these countries are symbols of the Pan-African movement and PAIGC colors. The Pan-African flag is a symbol of the African diaspora and the unity of the African people. It is based on the colors of the flag of Ethiopia, which was the only independent African country during the Scramble for Africa by European colonial powers in the late 19th century. Read More about the Red black Green flag Pan-African colors (Countries, Symbols, Meaning and Fact)

The color green in the flag represents the natural resources of Africa and the vast forests and nature of the continent. The color yellow represents the mineral wealth of Africa, which was so coveted by Europeans during the colonial era. The color red symbolizes the blood shed by those who died to achieve the independence of each country, as well as those who were enslaved since the 16th century. The black color represents the skin color of the majority of the inhabitants of these countries.

It aims to promote unity and cooperation among the people of Africa and the African diaspora and to work toward the liberation from colonialism and imperialism. The colors of the flag are also a reminder of the sacrifices that were made to achieve independence and freedom for the people.

19 Countries With Red and White Flags (Symbolize, Meaning and Fact)

The official flag of Myanmar a country in Southeast Asia also known as Burma was adopted on 21 October 2010. It features a design of three horizontal stripes of yellow, green, and red with a five-pointed white star in the middle. The three colors Yellow, green, and red represent and symbolize solidarity, peace and tranquility, and courage and decisiveness.

Saint Kitts and Nevis flag was adopted on 19 September 1983. It consists of a yellow-edged black band containing two white stars that divide diagonally from the lower hoist-side corner, with a green upper triangle and red lower triangle. The green color is said to be symbolic of the fertile land, black recalls the African heritage of St. Kitts, and red the overall struggle for freedom

What is the Meaning, Concepts and Theories of Love